Apple: Taking Over All of the Screens in Your Home 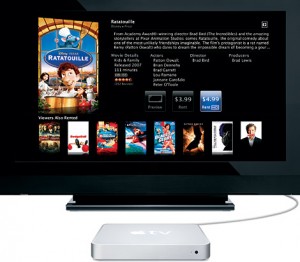 Apple started out as a small company with small ideas. In the past decade, however, the company has flourished and become one of the biggest phone, computer, tablet and music-player companies on the planet. There is one screen that Apple had yet to conquer, though: the television screen.

Apple recently introduced Apple TV, but only a little over 5 million units have been sold since the product’s genesis. The company itself called Apple TV a “hobby project,” and the sales reflect that: the iPhone sells that many units in a month.

Part of the problem has been that television isn’t an intuitive screen to conquer. Tim Cook, CEO, says that the television is not “the fifth leg of the stool; it’s not the same size as the phone or Mac or tablet business.” So getting into the market has been a difficult step, at best.

However, Cook and his team have plans brewing. The Apple TV app store is coming and is planned for release in the next year. The app store will be part of iOS6, which powers most of the devices that Apple already makes.

The app store is just the beginning. Rumors of the iTV are already in full swing, though it’s doubtful the new TV will be released this year. For now, Apple is planning to use the app store on units that already include the Apple TV modifications.

Once the iTV and app store have been released, all of the Apple devices that you own – the iPad, iPhone, and iPod – will be able to link to one another, creating a flawless network of information exchange. You can text from your television and watch movies on your music player.

Apple expects that they will have a prototype for the iTV at next year’s WWDC.